Why India Feels Cornered Than Never Before By A Hostile Neighbourhood

This refers to the cover story Little Fires Everywhere (July 6). Whether one likes it or not, India’s foreign policy lies in shambles. With hostile nations surrounding it, India may well be mired into unproductive pursuits. This is what China wanted. India’s dwindling clout in Nepal, Bangladesh, Sri Lanka and Myanmar is a cause for worry. We have been concentrating on powers like the US, Russia, France—no wonder these neighbours felt isolated and insecure. China is shrewdly trying to project India as a nation at loggerheads with its neighbours to detract from its expansionist policies. It is trying to portray India as a troublemaker. This is going to be a long-drawn affair, so India must come up with a long-term strategy. Otherwise, the dragon may spew venom on all fronts.

At a time when war drums are again being beaten with ear-shattering vengeance, the article Must Our Hearts Break? makes us pause and understand the tough job of manning the inhospitable terrains along our frontiers. It poignantly delves into the void that remains behind for the families of the martyred. War-mongering on television channels has always been easy, but that doesn’t mean our soldiers should lose their lives due to the faulty policies of governments. They should know that soldiers are not paid to be killed—that’s the work of terrorists on suicide missions.

India has its hands full as far as its neighbours are concerned. A mix of complacency and ill-conceived moves has led to a situation where the dragon is breathing fire along the LAC and political opportunism is prompting Kathmandu to take a defiant stand against New Delhi. Even Bangladesh was not too happy about the distorted propaganda accompanying CAA and NRC. Amid the lack of bonhomie with its neighbours, the looming China-Pak nexus is worrisome. India needs to rethink its relationship with China because it is the pivot on which India’s success with its neighbours hinges. Winning the goodwill of its neighbours while standing up to the bullying tactics of China will require a convergence of strategic, diplomatic and martial skills. India has no option but to rise to the challenge.

Those who do not learn from history are doomed to make the same mistakes. For decades, China and India were developing at the same pace. But economic reforms in the former saw transformative changes. China’s disregard for democratic institutions, its ambition of global dominance and continuous efforts to develop technological know-how and warfare tactics have bore fruits. Successive Indian governments, however, have worked to garner votes rather than trying to build a competitive, corruption-free economy. Internal enemies like corrupt politicians, bureaucratic bottlenecks and incompetent policymakers have left India floundering. Clapping, banging thalis and lightning diyas might have emotional value, but are not productive. Jingoistic reactions and boycotting Chinese products will do more harm than good as it is virtually impossible to keep the engines of our industries running without the grease of Chinese inputs. For Make in India to become a  reality, there needs to be a  robust infrastructure and competitive market. The government needs to focus on roads, railways, electricity, basic healthcare services, the education system and industrial policy. We have a bigger enemy than China and Pakistan that lies within our borders—false patriotism, which is the last refuge of scoundrels.

While Outlook’s articles on China are insightful, we also need to focus on the troubled relationship between Xi Jinping and the People’s Liberation Army (PLA). There are enough indications of a power struggle between the PLA and the Chinese President. PLA is not on the same page as Xi on many issues. Rapport with India is one of them. Xi was the first world leader to visit India after Modi assumed office in 2014. During the historic visit, the PLA deliberately intruded into Ladakh to stymie Xi’s goodwill visit to India. And recently, the PLA intruded into more areas in Ladakh, killing 20 Indian soldiers in the process. Xi, left to himself, would not have endorsed the intrusion, especially when his country is in the grip of a killer virus. It looks like the PLA has taken a leaf out of Pakistan Army’s book. Xi must take the PLA into confidence before he tries to improve relations with India.

Considering China’s expansionist attitude, it is not surprising that it has intruded into Indian territory. What has changed is this government’s response, attitude and language. First, it denied that Chinese intrusion took place, only to issue a “clarification” later. Then, unlike the threatening language Modi used after the Pulwama attack in February 2019, he used much milder language this time. But the most pathetic was the government’s response when people, especially the Opposition, asked questions regarding the Chinese intrusion. When the BJP was in the Opposition, it raised a hue and cry regarding China, but is now criticising the Opposition for doing the same. Alas, such double-speak and volte-face is common for the BJP.

Is Covid Pandemic The Real Reason Why Parliament Is Not in Session?

This refers to Missing In Action (July 6). The Opposition’s insistence on convening a special parliamentary session may be a political necessity, but when congregating in temples, malls and political rallies are banned, a gathering of more than 500 people is a big risk. If a single MP gets infected, both the media and political rivals will censure the government. The Centre must take Opposition parties into confidence through a video conference. This is an extraordinary period and missing one parliamentary session should not be construed as missing in action.

The article gives an impressive diagnosis of the ailments threatening the health of our parliamentary democracy. The country has been experiencing the heat of the pandemic and intensified Chinese hostility. The countries in our neighbourhood with whom we enjoyed friendly relations are now becoming hostile to us. It is high time for a session of the Parliament. The government must take all parliamentarians into confidence. Winning their trust will help boost the credibility of the government.

This refers to No One’s Godson (June 29). Sushant Singh Rajput’s tragic demise ignites a long-overdue conversation. The boy with the infectious smile has put the spotlight on mental healthcare. Obviously, there is no one-size-fits-all prescription for experiences that are intimately intertwined with our unique life stories. Who knows when Sushant’s tryst with depression began, but Bollywood’s strangely impersonal ways can prove fatal. All of us have to brave fierce winds and rough seas, though some get to travel on luxury yachts, while most of us make do with tiny boats. Sushant might have been a sensitive soul, but an unaccepting, toxic workplace was his undoing. This proves that mental health needs a social response. We need to acknowledge that mental health problems are a mirror to a society that is unfair and biased. Sushant’s death is the canary in Bollywood’s coal mine. It has sent out a warning, loud and clear. Will Bollywood wake up to the cesspool of toxicity that it has become?

This refers to A Grey Area (July 6). Gone are the days when the first strand of white hair would lead to intense discussions within the family. Not any longer though. Now, people have no qualms looking their age, sporting a mix of salt and pepper with considerable pride. White hair has always been symbolic of wisdom gleaned from life’s experiences. If there has been a marked shift and people have become comfortable experimenting with different styles, celebs are to be credited for this healthy change. After all, one’s crowning glory need not always be black, isn’t it so? 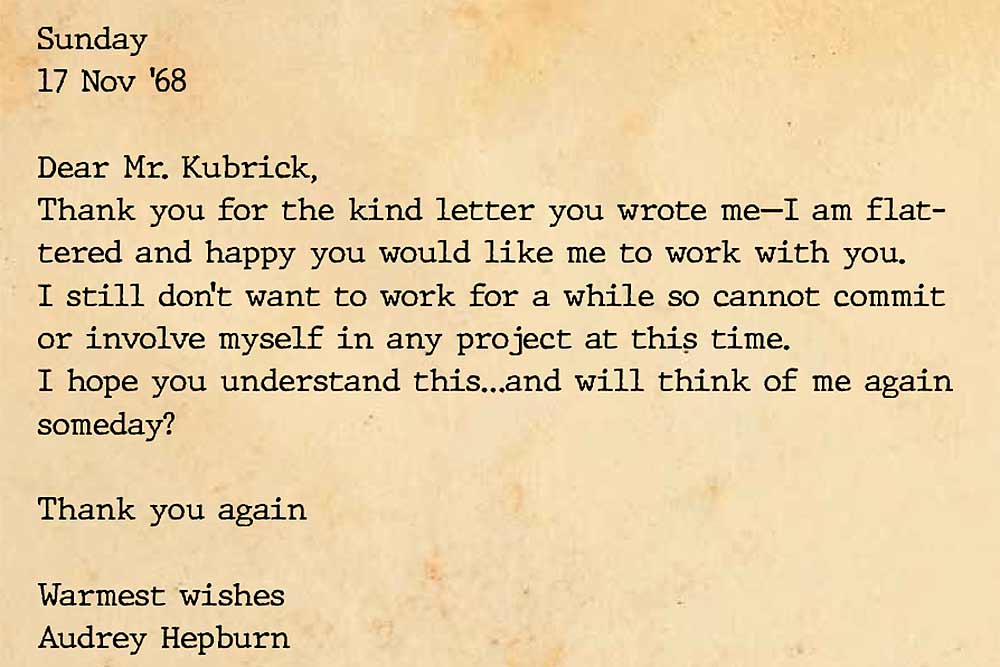 A Casting Odyssey Hepburn’s response to Stanley Kubrick’s offer to cast her in a film about Napoleon Bonaparte. It is considered one of the “greatest movies never made”.