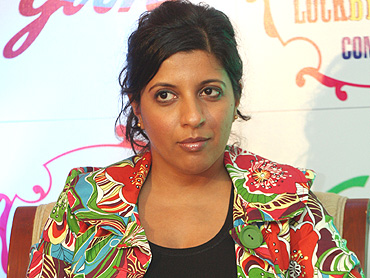 It was all fun when I was writing it. But casting became difficult. I almost gave up but returned to it after a while.

He never said he wanted to act so nobody thought of him. Reema Kagti cast him in Honeymoon Travels, but he started doing Don so he couldn’t do it. Then he was cast in Fakir of Venice which I watched and really liked. But before that it didn’t strike anybody.

Now that it’s over, what do you think?

I’m exhausted. I’ve seen it too many times. I can see how I would do it differently but now’s not the time. It’s my first film and I like it.

Are films entertainment for you?

Entertainment to me is a huge word. It doesn’t mean I have to keep laughing. A film needs to hold me, pull me in.

We watch films together and have differences, but 95 per cent of the time we agree.