An intriguing and engaging thriller --a ‘police procedural’, rather than a ‘whodunit’, that spreads over decades. 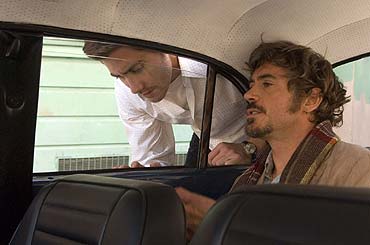 Zodiac is an intriguing and engaging thriller. The thrust here is not on dead bodies or on who killed them. Based on the ‘Zodiac’ killings, which terrorised San Francisco in the late 1960s and ’70s, the film leaves things open-ended—just as it happened in real life. Zodiac is the captivating killer who used to brag about his crimes in his letters to the editors of local dailies and played curious mind games, leaving clues about himself in the form of ciphers. It is a ‘police procedural’ rather than a ‘whodunit’ and spreads over decades. Through this time span, Fincher trains his camera on people other than the killer and his victims, following the case and the protracted drama. Gyllenhaal looks suitably wide-eyed in the role of geeky but obsessed cartoonist Robert Graysmith who eventually writes a bestseller on...