Bollywood’s first oomph girl on her role as Mrs Robinson in The Graduate, which opens this week. 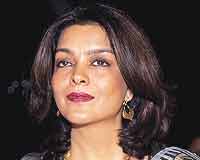 outlookindia.com
-0001-11-30T00:00:00+05:53
You're Bollywood's original sex symbol. How did it feel to do a role like this after so long?
I had seen the play at London's West End with Jerry Hall as Mrs Robinson. I had seen the film too and thought it would be a wonderful challenge.

It's not a role that fits the stereotype of a Bollywood actress. Was that an attraction?
That was definitely part of the attraction. But at the same time, it was a very age-appropriate role.

Is that rare in Hindi films?
It is. There has been some change but not enough. We are still way behind the west in that sense.

Has the play been Indianised?
Divya Palat (the director) bought the rights of the original play and has adapted it a bit.

It opens this weekend. Are you nervous?
Definitely. In a film, you may have moved on by the time it releases but you can make or mar a play with one performance.

This is your second play. Have you come to enjoy theatre more than films?
You can take a girl out of cinema but you can't take cinema out of a girl! I certainly...