'Yes, I Had An Alternative Plan (To Rescue Nagappa)'

The Karnataka chief minister in conversation with Outlook. 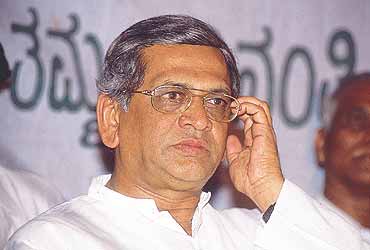 outlookindia.com
-0001-11-30T00:00:00+05:53
This certainly wasn't the end Karnataka chief minister S.M. Krishna had anticipated for the 106-day-long Nagappa hostage drama. After all, Veerappan had abducted actor Rajkumar but eventually released him. Nagappa's killing, however, has come as a major blow to Krishna, who has been bogged down by one crisis after another in the last two years. Excerpts from an interview with the CM:

Have the crises in the last two years impacted on your style of functioning?
The government is here to face such crises. Yes, the Cauvery dispute was a very difficult issue because it stirred up emotions. About Veerappan, we did not anticipate he would strike again. One of the worst miscalculations of mine was to depend upon officers who did not have any commitment to nab him immediately after Rajkumar's release.

The general impression is your government was slow and soft in dealing with Veerappan. Did you have a plan to rescue Nagappa?
Yes, I had an alternative plan. But it was thwarted by Nagappa's family and leaders of various political parties. They came in...