Wrong End Of The Stick 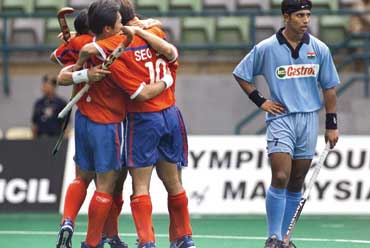 outlookindia.com
-0001-11-30T00:00:00+05:53
The slumped shoulders and bowed heads told the story of not just the Indian team in Kuala Lumpur at the 10th men's hockey World Cup, but also that of Indian hockey. Experts at the splendid National Stadium in the Bukit Jalil suburb were at a loss trying to fathom the continuing downswing in Indian hockey fortunes.

Many believe that the 9-12 bracket India finished in was not indicative of its true potential. Soothing to Indian ears, no doubt, but there was so much difference between supposed potential and actual performance that it was hard to believe this team was ever capable of reaching the semi-finals, a target set by chief coach Cedric D'Souza before he got the boot in the middle of the tournament (see box).

With the benefit of hindsight, and as per Cedric's own admission, the team could have been better prepared but for the cancellation of the training-cum-competition camp in Argentina in January. Instead, the probables were put through the grinder at lengthy camps where they played matches among themselves.

The run-up to the Cup was also sullied by...