The UAE-Israel agreement reflects a deep shift in Gulf nations’ priorities. Pakistan and India have to ride the realignment with care. 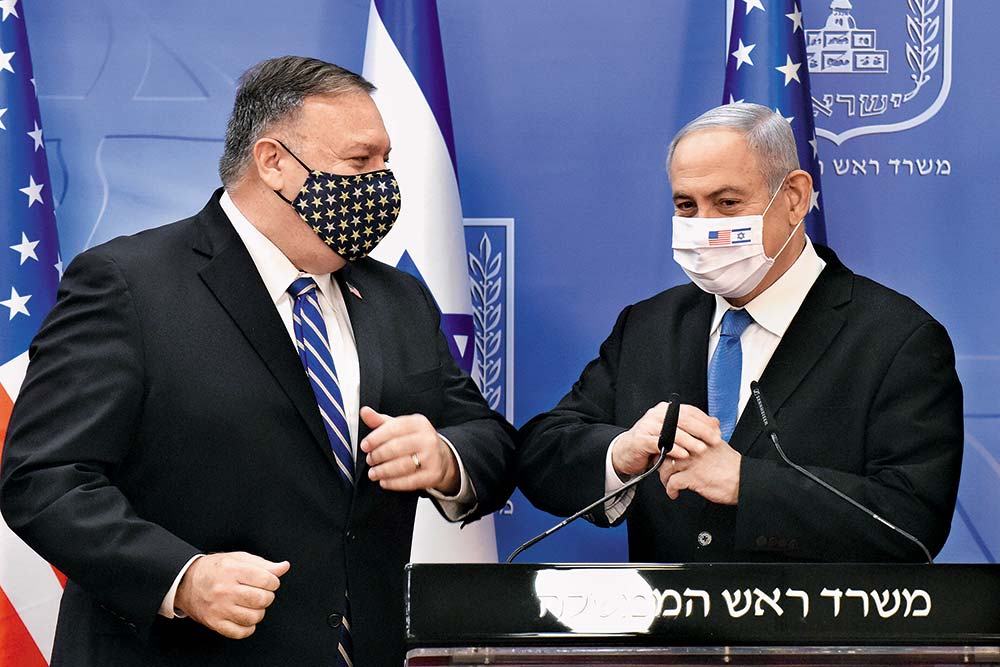 Holding fast
US secretary of state Mike Pompeo rubs elbows with Israeli PM Benjamin Netanyahu in Jerusalem. The US brought about the change in Israel-UAE ties.
Photograph by PTI
Seema Guha August 26, 2020 00:00 IST Realpolitik Over Idealism

The US-brokered peace deal between Israel and the United Arab Emirates (UAE) reflects the changing power dynamics across the Gulf states and the larger Muslim world. Israel, America’s closest ally in the region, has long stopped being regarded as the number one enemy of the Muslim world. More so to Washington’s friends, Saudi Arabia and the UAE.

The change did not happen overnight as the two sides have been talking beh­ind closed doors for a year at least. Nor is UAE the first Muslim country to recognise Israel and have full diplomatic ties with that country. Egypt had done it in 1979, followed by Jordan in 1994. Egyptian President Anwar Sadat enr­aged Islamists and was assassinated for his peace deal with Israel. But the world has changed dramatically since then.

The UAE-Israel deal has more to do with concerns over Iran’s growing clout than a concern for Palestine. Saudi Arabia and UAE see Iran as more of a  threat than Israel. The Palestinian issue is merely a fig leaf. President Donald Trump’s son-in-law, Jared Kushner, the...