Why Husain Quit India...Or Has India Quit Him?

The Grand Old Man of Indian art has made a new home for himself-- away from controversies-- on the Gulf shores, in Dubai. But given half a chance, he'd still prefer Mumbai 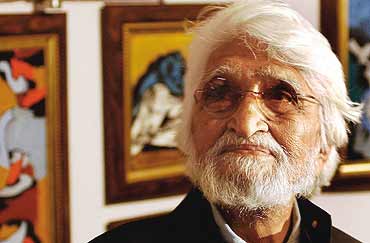 outlookindia.com
-0001-11-30T00:00:00+05:53
Even the Malabari chaiwallahs on Dubai’s creek know their barefoot customer is special. They rush to pull out a chair and wipe the grimy plastic clean of bird droppings when Maqbool Fida Husain drops in for a steaming ‘suleimani’, the fragrant black tea that is an Arab speciality. "I love going down there," Husain told Outlook soon after he bought an apartment in the plush Emaar Towers with a bird’s eye view of the bustling inland waterway. His Red Line gallery in the same upscale high-rise is his second. His first, the Ha Meem Qaaf gallery, features prominently on the route of the city’s tourist buses, and was initially his first home. He says he moved to the centre of the bustling commercial capital so he could meet real people. "I want to be able to walk on a street, share a moment with the chaiwallah, brush shoulders with ordinary people."

There’s no shortage of that. The boatmen repairing the ubiquitous dhows that ply the Arabian Sea are more than curious when the greying stranger sits on the crowded pier, peering at...