When it comes to selling the Big Idea, the BJP is miles ahead. Reason: its focused strategising, glib frontmen, media savvy. 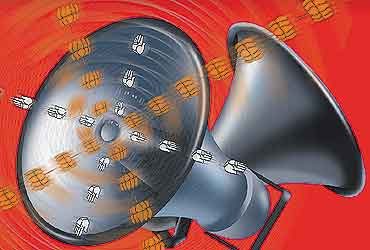 outlookindia.com
-0001-11-30T00:00:00+05:53
"Someone once asked me what would be the best job in Indian politics? I said, to be leader of the Opposition with Sonia Gandhi as prime minister!"
—BJP leader Arun Jaitley's favourite joke

They are glib, sharp and media-savvy. The marketeers of Brand BJP are in many ways different from the politicians of the past. Over the past 15 years, they have successfully sold Big Ideas to the nation. The Ram mandir at Ayodhya, Atal Behari Vajpayee as a larger-than-life phenomenon, the Terrorist Threat, Resurgent India and so on.

In the same period, the Congress has floundered. Hamstrung by an inexperienced central leadership, pegged on a vicarious Nehru-Gandhi aura, it shows itself to be incapable of seizing the moment. Uncomfortable with the sound bite culture of 24-hour news channels and unable to articulate a clear stand on issues, the Congress often seems bereft of the winning touch. Slowly but inexorably, it is losing the propaganda edge. Already, its biggest ideas and icons, from Dalit politics to Gandhi to khadi, have been coopted by the competition.