Women in Devdas 1955 were weepy, slavish and suffering. The heroines in Devdas 2002 are women we can relate to. 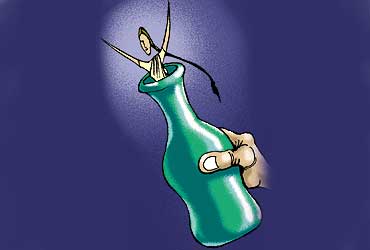 outlookindia.com
-0001-11-30T00:00:00+05:53
"The suffering of either sex—of the male who is unable, because of the way in which he was reared, to take the strong initiating or patriarchal role that is still demanded of him, or of the female who has been given too much freedom of movement as a child, to stay placidly in the house as an adult—this suffering, this discrepancy, this sense of failure in an enjoined role, is the point of leverage for social change."
—Margaret Mead, anthropologist

And, we have a "point of leverage of social change" in the eighth film of Saratchandra's book Devdas. So, a whole generation wept with Dilip Kumar as Devdas in Bimal Roy's 1955 film? Yeah, that was then. Who is crying now? No one. Certainly not with Shahrukh Khan in Sanjay Leela Bhansali's zabardast prosody. It has nothing to do with the quality of Shahrukh's acting. Although, busting Dilip Kumar's version is a tough call, even when seen today. The story hasn't changed, we have. This gen-x just does not like, will not accept and totally dismisses losers. In the '50s, the public identified with a...