Where The Family Heirs Loom

The DMK has become unwilling hostage to Karunanidhi's family obligations 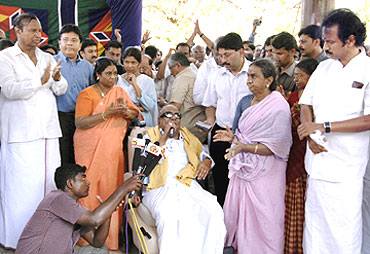 "The question ‘after me, who’ will be decided by DMK’s general council. There is no agenda to make Stalin CM."—Apr ’01

"DMK doesn’t believe in dynastic rule; the discretion of having an old or young or new leader rests with the general council."—Jul ’02

"There is no room for dynastic rule in a democratic party like the DMK; the family legacy won’t be allowed."—May ’07

C.N. Annadurai, founder of the DMK and Tamil Nadu’s first non-Congress chief minister (1967-69), would often say that the ‘kazhagam’ was "like a family". To bring about a greater bonding between its members, he had introduced an element of kinship, addressing his partymates as ‘thambi’ or younger brother while he himself was ‘anna’ or the protective elder brother. People accuse his successor, the present DMK chief and Tamil Nadu chief minister M. Karunanidhi, of turning this familial informality in the DMK on its...