When The Moon Landed In America

It appears disingenuous now to be outraged by the moral nullity of America's leaders, the lynchmob rage they are currently stoking across the US. 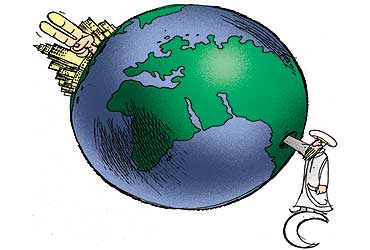 illustration by Jayachandran
Pankaj Mishra October 01, 2001 00:00 IST When The Moon Landed In America

outlookindia.com
-0001-11-30T00:00:00+05:53
Two months ago, as I was about to board a Eurostar train to Paris from Waterloo sta-tion, London, I was stopped, taken to a room with dark windows, and questioned by a man in plainclothes from the Metropolitan police's anti-terrorist squad. He was courteous, at least until he discovered the visas for Pakistan and Afghanistan. There was an odd excitement in his eyes when he looked up and began an increasingly aggressive interrogation. I told him that I was a writer and had gone to these countries on behalf of an American paper. It seemed hard for him to believe me. He kept asking me about whether I had met anyone close to Osama bin Laden, whether I knew any Islamic extremists, and my truthful answers only seemed to work him up into a kind of frenzy.

Minutes passed. I told him that I had a train to catch. I felt the contempt in his voice when he said he had to check me against certain profiles of potential terrorists he had. I resented his tone, but at the same time felt nervous and almost guilty of some unremembered misdemeanour. Luckily, I had the idea of asking him to check...