What If DD Hadn't Telecast Ramayan?

What if the Mahabharat had been screened first? The ethical rather than the identity component of Hindu culture might have been foregrounded. Here were lessons for caste politics as well as for economic reformers. 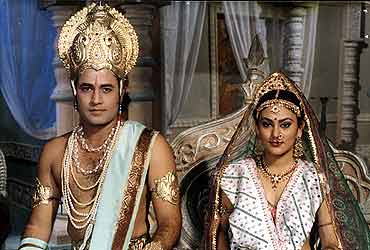 outlookindia.com
-0001-11-30T00:00:00+05:53
You may not remember, but there used to be a policy against broadcasting religious programmes on a regular basis. As a government organisation, Doordarshan was obliged to treat all religions equally. This meant refraining from sustained programming targeted at one community. Call it minority pampering, but that was the policy until January 1987. In the third week of that month, DD began airing Ramanand Sagar’s Ramayan.

The decision to screen the epic was taken under a Congress government. In a short time, the BJP, aided by its Ramjanmabhoomi campaign, came to occupy "the centrestage of politics," L.K. Advani claimed. The VHP’s Ashok Singhal, who led the campaign, has acknowledged that the Ramayan serial was crucial in inspiring recruits to the janmabhoomi andolan. What if DD hadn’t screened Ramayan?

There’s existed for some time an illusion that ‘Hinduism’ could unite people, that it could bring an ancient civilisation together again, make it great once more. The Ramayan’s extraordinary appeal helped move this illusion out of...