'We All Have Our Struggles'

Javed and Farhan Akhtar stand on either side of a chasm of sensibility—anger and feelgoodness typify their respective lived histories. Yet, father and son manage to get together. 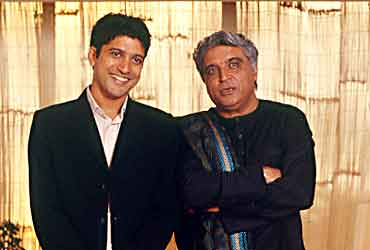 Javed and Farhan Akhtar are or were the young men that most young men have wanted to be, except they probably didn't know it. In the '70s being young was about being the angry young man and now two years after Dil Chahta Hai, most self-respecting young men have the triangular tuft at the chin. Both characters that defined cool in their age draw from their writer's personalities. Farhan is now wrapping up shooting on what has been their closest collaboration—his new movie, Lakshya, which was scripted by Javed.

Here, father and son talk about being young, their movies, working together, the generation gap and their relationship. They show the snappiness of the young, the mellowness of iconic fathers, and the disparity in views of fathers and sons and also the bonding of two immensely creative men.

What's been your career's biggest risk?
Javed: Choosing a career in films. I come from a family of academicians and civil servants, so it was a risk to be in an industry where you are only as good as your last film.