Consider the unhygienic conditions in a country where in the Harappa civilisation, each house had its own 'flush' toilet. 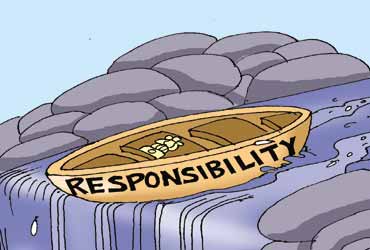 outlookindia.com
-0001-11-30T00:00:00+05:53
A cold winter day in Delhi. It's around noon and the sun is struggling to shine. There are two little children, stripped down to their underwear, standing next to a fountain in a public garden, shivering, holding their arms close to their chests, trying to keep warm under the weak sun. Their mother is getting ready to give them a scrub down. I close my eyes and think of my own childhood, standing for a scrub, but always in a clean bathroom with warm water. I think of bathing my babies years ago, even putting a little heater in the freezing bathroom. And I look at these two little children, who not only don't own a bathroom but do not even have access to one. How can such unfairness exist?

Yes, living in India, one sees injustice and inequality all the time, manifesting in thousands of ways. Why am I focusing on a fountain with two little kids? Because I read that the New Delhi Municipal Corporation (NDMC) has just spent Rs 10 lakh building an artificial waterfall in a protected 15th century archaeological site, the tomb of Dariya Khan, in south Delhi. On a national level and...