The former Pakistan captain was in Mumbai to join the hunt for an Indian fast bowler. 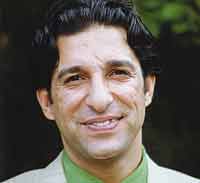 outlookindia.com
-0001-11-30T00:00:00+05:53
Can events like Scorpio Speedster throw up a genuine quick bowler?
Yes, but the right way would be to go to smaller towns where there is more talent and hunger.

You like promoting events in India?
I like coming to India, I like the people, the food; the culture is very similar to Pakistan. If I find some talented cricketers, it would be great.

What is the biggest reason for India's failure to produce a real fast bowler?
The Indian cricket board didn't look into this aspect. I think they should've gone to smaller cities. Following this event, I am sure we'll find some.

What about S. Sreesanth and R.P. Singh?
I haven't seen Sreesanth. R.P. Singh looks quite promising.

What do you make of Zaheer's exclusion from the Indian team?
He's experienced and should be in the team.

How will the upcoming Indo-Pak series go?
It would be a good series. Pakistan would be...