Who watches the watchdog? Is the media criticising itself as relentlessly as it does others? Has it become part of the problem? 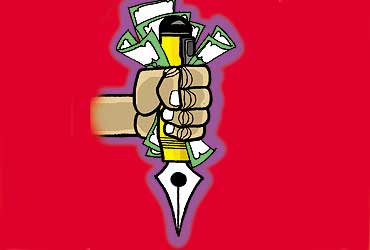 outlookindia.com
-0001-11-30T00:00:00+05:53
Law minister Arun Jaitley was travelling with a TV star/journalist when he found to his amusement that the crowds he thought were waving at him were actually focused on the man standing next to him. A clue to the spirit of our times. The Power Media star. How did the Fourth Estate get into this position where it's become a hated (by all the other estates) necessity of democracy?

What are the main functions of the press? Gandhiji wrote, "One of the objects of a newspaper is to understand the popular feeling and give expression to it; another to arouse in people certain desirable sentiments; and the third is fearlessly to expose popular defects." The Indian press played a tremendous role in national awakening during the freedom struggle and was part of the nation-building process. Today, we have become obsessed watchdogs in "exposing defects" without a thought to nation-building. We now come to the crucial question: who watches the watchdog? Does the media criticise itself in as relentless a manner as it does everybody else? Is the media above being influenced by political...