'Vajpayee Must Quit And Hand Over Everything To Advani' 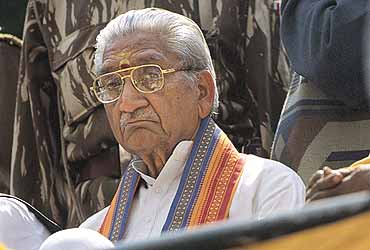 outlookindia.com
-0001-11-30T00:00:00+05:53
Your relations with the PM have soured over the Ram temple issue. How are things now?
Don’t ask me. If the Centre is unable to introduce the required bill for building the Ram temple, then the PM should resign and go back to seek the people’s mandate. Vajpayee needs to hand over everything to Advani.

What do you mean ‘everything’? Should he make Advani the prime minister?
No, he should hand over the party and the whole Ayodhya issue to Advani.

How will Advani’s entry pave the way for constructing the Ram temple?
See, the temple is possible only through legislation. Advani has had an active role in the movement. He took out the rath yatra from Somnath, he was arrested with us at Mata Teela. He appreciates the role of the temple movement and the concerted efforts Hindus have played in the BJP’s success.

Who was behind the deal?
The government. It was abetting the Shankaracharya...