A bizarre, farcical, political allegory-cum-thriller. Set in the future, it presents a banana republic Britain, under the thumb of a despot, a queer mix of Lenin and Hitler. 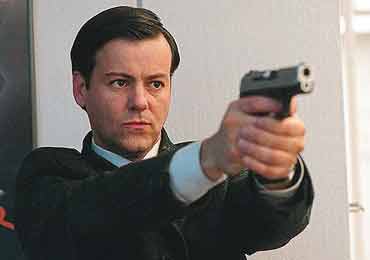 V for Vendetta reminded me of our very own Rang De Basanti. Both films are popular clarion calls to fight the corrupt state and both show how the mass media or the government can be ever so easily subverted to whip up a mass revolution. Like Rang De..., V for Vendetta has also found critics neatly divided along the ideological line— one set appreciating its attempt to articulate public anger and frustration, the other calling it "irresponsible". The attack on the film has been particularly scathing in Britain. Could it be because it denounces the stiff upper lip genteel England as an irredeemable menacing dystopia without dwelling on the rogue ally, usa? Uncle Sam, actually, gets dismissed as the "world's biggest leper colony". Strange if writers Wachowski Brothers meant this as a diatribe against the US-UK coalition!