If there's one adjective to aptly describe United 93, it's rigorous 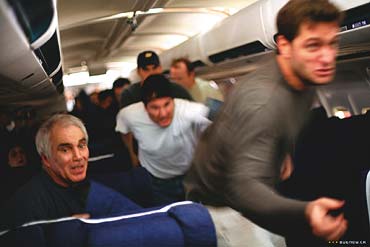 If there’s one adjective to aptly describe United 93, it’s rigorous. Paul Greengrass is extremely thorough in recreating the events aboard the flight from Newark to LA on September 11, 2001. It was one of the four hijacked planes that missed its target due to the sudden intervention by its passengers. Instead of hitting the Capitol Hill it crashed at Shanksville, Pennsylvania.

The film doesn’t offer any insights, nor does it deeply analyse the politics and repercussions of those globe-shattering events. It just aims to be an accurate docu-feature. We begin with the terrorists praying and preparing for their suicide mission and then move on to the airport. The feeling of imminent doom magnifies in the face of the humdrum of daily flights. It’s just another ordinary day for an ordinary set of people who are engaged in commonplace conversations....