It followed fads when it should have led the way. And thus put the fate of 2 crore investors at stake. 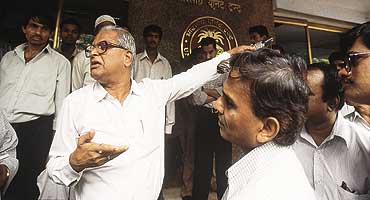 EVERY morning, the crowds gather outside the glass-panelled Mumbai headquarters of the Unit Trust of India (UTI), their faces reflecting the uncertainty and despair the country's largest mutual fund has heaped on two crore investors. Occasional cloudbursts force the protesters to seek temporary respite in the building's portico, even as many wonder whether uti was playing a similar hide-and-seek game with the life's savings that they had invested in US-64. A strong posse of private guards prevent the irate crowd from entering the building.

"What value does this have? Where is the word trust in uti? It's like my bank telling me not to withdraw money," screams Satish Kulkarni, waving a clutch of US-64 certificates. D. Soans, a retired state government official, joins the chorus: "For decades, we considered uti as good as the government. Like God. But now we realise that even God...