Under The Shade Of Two Thousand Umbrellas

Nair recounts all the goodness of the man, but also his flaws: his unfailing unpunctuality, pedagogy 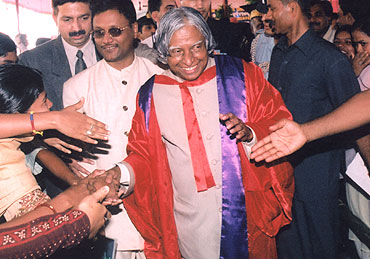 outlookindia.com
-0001-11-30T00:00:00+05:53
Of the 14 presidents this country has had so far, only R. Venkataraman, now in his 90s, has written an eminently readable book on his years in Rashtrapati Bhavan. Giani Zail Singh also wrote a memoir of sorts that someone else translated into English, but it had little to say. Captain (later Colonel) R. Dutt, an ADC to the first two presidents, Rajendra Prasad and S. Radhakrishnan, recounted those years in With Two Presidents. Now we have P.M. Nair’s account and assessment of his years as secretary to President A.P.J. Abdul Kalam. The title of this slim book, The Kalam Effect, gives its essence. Kalam had handpicked Nair for the secretary’s job. The two had worked together in harmony at the Vikram Sarabhai Space Centre at Thumba in the early ’80s, Kalam as a respected scientist and the ias officer as the centre’s "Controller". Ironically, Nair was reluctant to take up the offer, until two men he respected told him tersely "not to be a bloody fool" but jump at it.

Nair’s deep admiration for Kalam is as manifest in this...