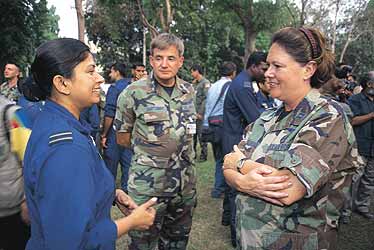 outlookindia.com
-0001-11-30T00:00:00+05:53
Is the mighty Indian army crumbling? Are Indian army officials much too protocol-conscious as compared to the Pakistanis? And is, indeed, the top army brass here extremely difficult to work with?

In an unprecedented move, a highly confidential and sensitive report prepared by the US' Pacific Command has put in critical perspective the 'abilities' of the Indian army. The assessment is sponsored by the high profile American Defence Department. It is authored by Julie A. Macdonald, director, Net Assessment office of the US Secretary of State for Defence, Donald Rumsfeld. The 141-page report is titled 'Indo-US relationship: Expectations and Perceptions'.

The report draws heavily from inputs provided by top Pentagon officials. These officials have been in constant touch with the Indian military in a decade-long army-to-army cooperation that became stronger in the early '90s. This relationship has intensified since India went nuclear.

Predictably, the American 'critique' has raised hackles within the defence establishment in New Delhi. Several serving and retired...