U-Turn On A Train

He couldn't do it to Bihar. But Laloo has made the railways shine. 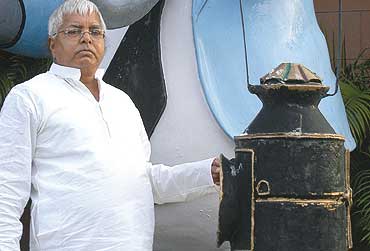 What did the minister do to turnaround Indian railways?

Not an advertisement for good grooming. A stained spittoon next to him. Posing for pictures in the trademark ‘ganji’ (vest). And making absurd statements like "Floods are good for Bihar as the poor get to eat fish which swim into their houses". This is the Laloo that the media has been lapping up for long—politically shrewd but a bucolic buffoon.