'Please spare me the Congress-style secularism,' says the fiesty dissenting leader all set to join the BJP. 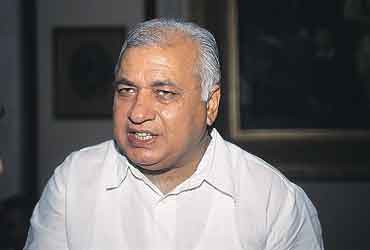 Arif Mohammed Khan left the Congress protesting the concessions given to the Muslim clergy during the Shah Bano case. Now he is cosying up to the BJP.

Have you joined the BJP formally?

Yes, I have met L.K. Advani and Pramod Mahajan and it is clear that I will be campaigning for them. In my meeting with Advani, I told him it was up to him to decide whether I will be more effective if I actually joined the party.

So, you will be contesting on a BJP ticket?

I am not contesting elections.

You made noises about the atrocities in Gujarat. How would you feel campaigning alongside Narendra Modi?

You accuse the BJP of being communal. What about the Congress? If they had not succumbed to the Muslim clergy and had not opened the gates of Babri Masjid, believe me this country would not have been communalised to this extent. As for Gujarat, the Congress refused to even publicly condole the murder of its former MP, Ehsaan Jafri.

So the people who killed Jafri are better than those who did not condole his death?