TNBP has arrogance and Bollywood decadence writ all over. 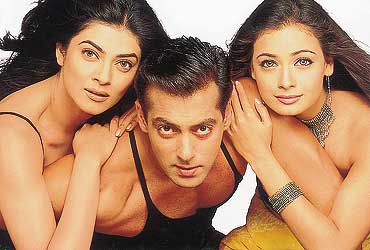 There is no dialogue writer in the film: in the climax Salman Khan discovers that his friend was the one who got his girl and tried to kill him. He keeps asking him why he did that even as the friend shouts it was for money and love. Similar sequences convince you that even TNBP’s screenplay was written on the sets. Salman starts as a zonked village yokel who discovers he has a memory loss.

He goes to Mumbai in search of roots,and his brother, who gets bumped off in the first meeting. What kind of a Hindi film is this where the mission’s almost over before it has begun? Everything else is also wrong: action scenes fly out of nowhere, side characters appear and disappear without warning and songs ridicule the very concept of lyrical relief. Salman’s present as a haggard, aging star. Both Diya Mirza and Sushmita Sen revive the Hindi film heroine as a pathetic Barbie doll. tnbp has arrogance and Bollywood decadence writ all over.