Trouble In The Backyard 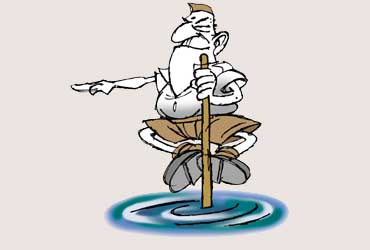 outlookindia.com
-0001-11-30T00:00:00+05:53
Before leaving for Teheran last week, Prime Minister Atal Behari Vajpayee went into crisis-management mode: he summoned labour minister Satyanarain Jatiya to ask about the rss-backed Bharatiya Mazdoor Sangh (bms) Delhi rally against the government's economic policies on April 16, the day Parliament reconvenes. bms sources told Outlook that rss chief K.S. Sudershan "gave the go-ahead for the rally" though he personally was unlikely to attend. For a government that has now been reduced to devoting political energies to manage the fallout of the Tehelka and stockmarket scams, this rally is inconvenient. A central minister later followed up on Vajpayee's concern by calling on bms leaders. He asked them in a lighter vein: "To kya aapne sarkar ko hatane ka faisla kar liya hai (Have you decided to topple the government)?"

In the past, the bms' periodic anti-government agitations failed to find a political resonance. But this time, rss stalwart Dattopant Thengadi has decided to participate, a move that has set off alarm bells in the government. A little over two years ago, when...