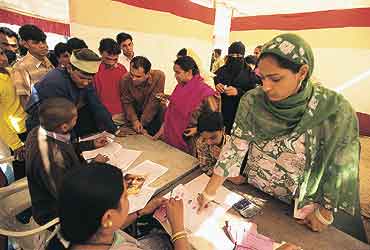 outlookindia.com
-0001-11-30T00:00:00+05:53
It was touted as an election with a difference. For the first time, voters in the four states—Madhya Pradesh, Rajasthan, Chhattisgarh and Delhi—were given the right to know the background of the candidates they would elect as their policymakers. But the Election Commission's (EC's) diktat to all those in the fray to disclose their assets, criminal antecedents and educational qualifications in the recently concluded round of assembly elections has exercised only a marginal influence on the choice exercised by the voters. Certainly not to the extent the EC had hoped for.

A scan of the affidavits filed in the four states and the final outcome at the hustings shows that many candidates with criminal antecedents were posted to easy victory. Nor was money power a deterrent: several legislators in the newly convened assemblies had assets, both moveable and immoveable, running into crores of rupees. Perhaps the one redeeming feature in these elections was that the electorate voted for more 'educated' legislators than in the previous years.

That crime and politics go hand...