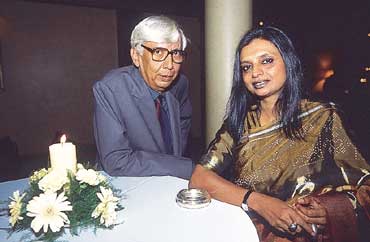 outlookindia.com
-0001-11-30T00:00:00+05:53
Out of God’s Oven is the result of Dom Moraes’ and Sarayu Srivatsa’s perambulations around India in the last six years. It begins with a Prologue on Gujarat after Godhra and includes a peripatetic commentary on Ayodhya, the militancy in Punjab, Laloo land, an encounter with the dacoits of Madhya Pradesh, visits to Kolkata, Chennai and Kerala, and more.

The structure is very Naipaulesque: encounters with a series of people, thoughtful character sketches, an occasional moment of great perception and a lot of readable but inconsequential detail. Dom is first and foremost a poet, a craftsman with words, a master of the chiselled phrase. He is best when speaking about himself. The autobiographical details about his demented mother and his long-suffering father, and of his sad and traumatised childhood, make compelling reading. He is very good too in describing others and in reporting what they say. Sarayu’s dexterity with the language was a discovery.

This being said, Dom and Sarayu offer very little new as insight to justify their extensive travelling....