The doctrine of 'massive' retaliation may look good on paper but signalling a holocaust just invites one. 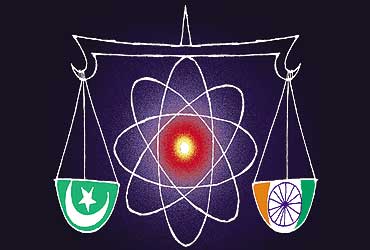 outlookindia.com
-0001-11-30T00:00:00+05:53
Successful deterrence requires knowing one's adversary. How well does India know Pakistan, or vice-versa? Most officials in both countries would probably scoff at this question. Indian leaders appear confident in their view of Pakistan as a deeply troubled country whose military leaders are fixated on Kashmir, riding the tiger of militancy so as not to be thrown off it. Conversely, for most Pakistani military leaders India is mostly talk and little action, whose inherent weaknesses lie just beneath the surface of a growing economy.

Like most stereotypes, there is truth in these oversimplifications, but also much potential for erroneous judgement. This potential grows as long as India-Pakistan dialogue remains in a deep, prolonged freeze. Although regular contact does not ensure a good track record in predicting developments on the subcontinent, the absence of dialogue tends to foster misperceptions. The potential for misjudgements is compounded when both countries lack a non-governmental infrastructure devoted to serious, non-polemical study of each other. Under these...