'This Is For India' 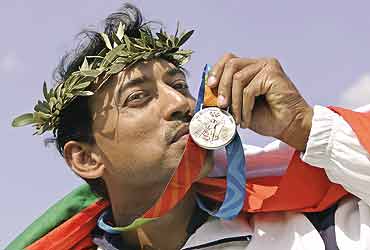 outlookindia.com
-0001-11-30T00:00:00+05:53
In a night battle on the J&K border a decade ago, Rajyavardhan Singh Rathore took a militant's bullet in the leg. Last week it was Rathore's shooting that made him the first Indian to win an individual Olympic silver. V. Krishnaswamy spoke to the 34-year-old army major. Excerpts:

Did you realise you had to shoot both your last two birds to stay ahead?
I caught the scoreboard once and rebuked myself for thinking about it. I told myself to just think about the two birds. I didn't think about anything except getting both the birds.

How do trap and double trap differ?
In trap, one clay bird comes out of the trap. In double trap, two birds emerge. Sheikh Ahmed Al Makhtoum (the Athens gold medallist) gets the first one fast and so has time to hit the second. I follow the same method.

Are you happy to be the first Indian to win an Olympic silver medal?
Actually, no. There should have been many more before me. But I am happy I won a medal.

Did you realise what this means?
I didn't realise it would...