This CD Is Not Reading

The Varun Gandhi controversy isn't working, parties aren't willing to give the BJP a handle 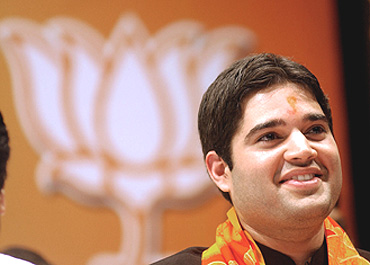 outlookindia.com
-0001-11-30T00:00:00+05:53
The general consensus in the regions I travelled in was that the real impact of BJP candidate Varun Gandhi’s hate speeches—and his imprisonment, following his being charged under the National Security Act—would be limited to Pilibhit and the surrounding constituencies. This is largely because the Muslims as a whole are determined not to allow the BJP to benefit from the episode. "There were no protests by Muslims on the streets," the Imam of Lucknow, Khalid Rashid, told Outlook, "because it would have led to polarisation of votes and helped the BJP. We won’t be trapped by the BJP." This is a view echoed by Muslims elsewhere in the state too.

BJP supporters—in particular, Gorakhpur’s Yogi Adityanath, who has openly endorsed Varun’s remarks—have been trying to whip up Hindu sentiment. For the "Hindu-minded", Varun’s speech has struck a chord though many feel that he should have been guarded in his language. Curiously, the party’s state president Hridaynath Dikshit is ambivalent: "We have disassociated the party from...