Things Are Never What They Seem

A short piece from the celebrated author of The Alchemist. 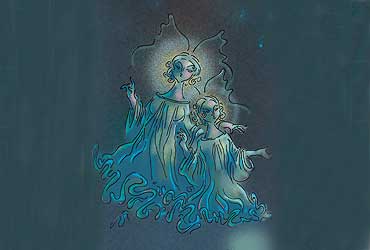 illustration by Jayachandran
Paulo Coelho January 14, 2002 00:00 IST Things Are Never What They Seem

outlookindia.com
-0001-11-30T00:00:00+05:53
According to an ancient and familiar legend, whose precise origins I have been unable to ascertain, a week before Christmas, Archangel Michael asked his angels to visit Earth, he wanted to find out if everything was ready for the celebration of Jesus' birth. He sent the angels in pairs, an older angel with a younger one, in order to get the broadest view possible of what was going on in the Christian world. One of these pairs of angels was sent to Brazil, where they arrived late at night. Since they had nowhere to sleep, they sought shelter in one of the large mansions that can be found in certain areas of Rio de Janeiro.

The owner of the house, a nobleman on the brink of bankruptcy (a fairly common occurrence amongst the people of that city), was a fervent Catholic and he recognised the celestial envoys at once by their golden halos. However, he was very busy getting ready for a big Christmas party and, having almost finished the decorations, he was reluctant to disrupt them in any way; and so he asked his visitors if they wouldn't mind sleeping in the...