"They Suddenly Had Feet Of Clay"

Rajasthan chief minister Ashok Gehlot was regarded as a softie until the arrest of Praveen Togadia. In an interview to Outlook, he explains why he arrested the vhp leader. Excerpts: 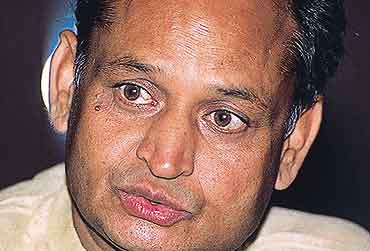 outlookindia.com
-0001-11-30T00:00:00+05:53
What made you act against Togadia and the VHP?
Since the nda government came to power, the VHP and Bajrang Dal had begun to think they are above the law. What I have done is to invoke the law. Trishuls have to be regulated and speeches have to be restrained. Even L.K. Advani agrees that tridents are dangerous. I am doing just what the law demands. These people call themselves by fancy titles like acharya, while their speeches are filthy and abusive.

Did the arrest have the desired effect?
You will be surprised—they suddenly had feet of clay. This is the language these people understand.

What other steps do you plan to take?
I have banned rss shakhas. Inflammatory speeches are being recorded carefully and action would be taken instantly if the law is transgressed in any way. As chief minister, I am answerable to the Constitution and law.

The VHP and Bajrang Dal say there will be a Hindu backlash. What do you think?
That is what they said when Togadia was arrested. Now we know better. This is not being anti-Hindu,...