They Chewed Up The Hills 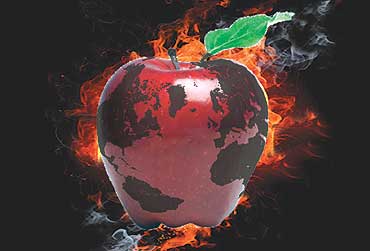 Illustration by Sandeep Adhwaryu
Neelabh Mishra July 13, 2009 00:00 IST They Chewed Up The Hills

outlookindia.com
-0001-11-30T00:00:00+05:53
In nearly 500 km of meandering through the Solan, Shimla and Kinnaur districts of Himachal Pradesh, on National Highway 22, and off it, it's a 17 km detour off Jeori to picturesque Sarahan. Not very far from the exquisite Bhimakali temple is a nondescript shop that, in this season, usually stocks fresh apricots. "Apricots are the pride of Kinnaur, but this year we have none to offer because the crop has failed badly," a retailer had told us at Rekong Peo, the district headquarters of Kinnaur. He did not even have dried apricots, with which we plainspeople are more familiar, for the crop was poor last season too. Nor did he have chilgoza (pine kernel) or walnuts, both of which Kinnaur is famous for. He only had Kinnauri almonds to sell.

All through our Himachal journey, we never found peaches to match the luscious ones we had bought in Panchkula, before we entered the hill state. We found healthy cherry trees, laden with fruit, nowhere in Himachal except within a few kilometres of Narkanda. In orchard after apple orchard, we wondered, where...