The United Colours Of Football

Football is seen as a primarily black sport in South Africa, but even white mothers, prompted by their children, have got into the spirit of the sport and the event. 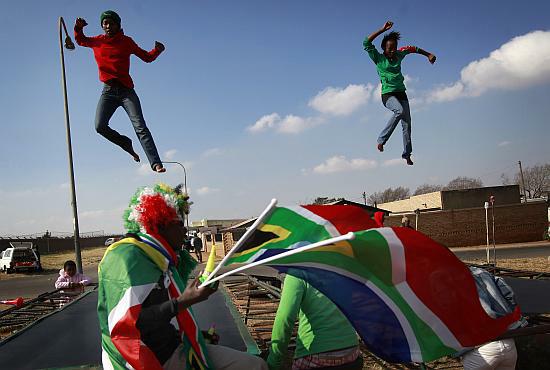 Khabisi Mosunkutu, the minister for community safety in South Africa's Gauteng province, casts a glance over the wetlands that border Mofolo Park in Soweto and sighs. "We used to hide there and hold secret meetings during the apartheid era," he says. "It was hard to imagine then that one day we’d be holding a party here and getting ready for a carnival for the soccer World Cup!"

He looks over the other side of the park in disbelief, at the riot of colours in the form of giant puppets, hundreds of children from neighbouring villages and towns and dancers getting ready for a two-day carnival to celebrate South Africa's hosting of the FIFA World Cup 2010.

Soccer City – the state-of-the art stadium shaped like a calabash, an African pot – where the finals of the World Cup will be played, lies a few kilometres from Soweto, the massive black township outside Johannesburg, site of many protests against the apartheid regime.

An excited Sello Mothibi, a traditional performer, fastens the ends of his Xhosa...