The Tube Gets To Tenali

A little late in the day, but desi Birbals are coming into their own in a world of Mickeys and Popeyes 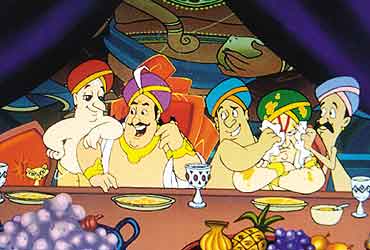 outlookindia.com
-0001-11-30T00:00:00+05:53
Remember the occasional Katha or Padosan where the film opened with cartoons and credits sharing screen space? The use of animation in Hindi films has usually been limited to that, the odd comedy flick where vague cartoon characters prance about on screen, introducing credits accompanied by some comical-sounding music in the background—thereby setting the tone for things to come.

One of this year's biggest hits, Yash Raj films' Hum Tum, is trying to change all that. Its cartoon characters Hum and Tum are woven into the storyline, quite like songs, appearing in between scenes in an attempt to take the story forward. In fact, very soon Hum and Tum will be leaving stars Saif Ali Khan and Rani Mukherjee way behind, moving on with their own cartoon series. Film director Kunal Kohli asks enthusiastically: "If The Mask could inspire an animation show, why not Hum Tum?"

The pencils that sketched the toons for Kohli's film belong to a bunch of animators from Tata...