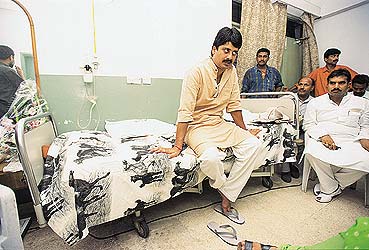 The scene is straight from a Hindi potboiler. Fierce-looking men, guns slung over their shoulders, have taken over Lucknow’s civil hospital. They are guarding the precious lives of Raja Bhaiyya and several other Thakur politicians who have sprung out of jail after the change of guard in Uttar Pradesh. New CM Mulayam Singh Yadav’s first decisive step was to withdraw the pota charges against Raja Bhaiyya. Shunted around seven district jails in the last 10 months, Raghuraj Pratap Singh or Raja Bhaiyya, the infamous king of Kunda, is now comfortably ensconced in the VVIP room of the Civil Hospital’s private ward.

The air-conditioner is on full blast and there’s an overpowering stench of decaying flowers. Boxes of sweets are being passed around among the hangers-on, ranging from henchmen to Thakur legislators. Even UP BJP strongman Rajnath Singh and SP’s Thakur satrap Amar Singh have dropped by. Raja Bhaiyya...