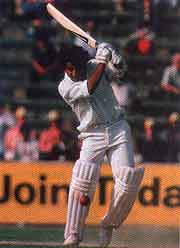 He was India's greatest batsman but Sunil Gavaskar's legacy to Indian cricket goes beyond batsmanship. He instilled in the Indian cricketer a pride, and ushered in anera of professionalism. His authoritative presence earned India a newfound respect in international cricket, and its cricketers the means to a good living.

When Gavaskar came into the Indian team in 1971 players got 750 per Test; by the time Gavaskar moth-balled his kit, it had increased by at least ten times. Today's cricketers have Gavaskar to thank for their astronomical match-fees.

Gavaskar stood up for what he believed in and didn't have any qualms about taking on the establishment or the established: recall him calling the selectors court jesters, his firm stance against umpiring in Pakistan, and his face-off against Dennis Lillee in Australia.

More often, however, his bat did the talking. In 1971, Gavaskar was a 21-year old lad on his maiden Test tour. By the end of the Caribbean tour in 1971, the world saw evidence of a cricketing legend in the making: he made an...