Fear grips the city, smiles turn to frowns, people wonder if they should stay in, or in solidarity... go to work. 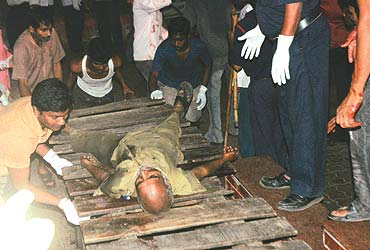 The city had been attacked by terrorists, a channel reported. Another channel screamed that the city was surrounded. Panic spread. My driver thought at first that it was an FM radio jockey’s joke. But he soon realised the gravity of the situation. Of course, we were in north Mumbai, in the faraway western suburbs, while the attack had taken place in south Mumbai, at least 30 kilometres away. Reporters were talking about gun-toting men running amuck with hand grenades, a bomb in the railway station near the domestic airport, another in a hospital. It all sounded so surreal and filmy that few even believed it.

On the Andheri-Kurla road, life was normal—a traffic jam, even at 11:30 pm; dug up roads, debris, Metrorail construction work.... We saw people talking on their...