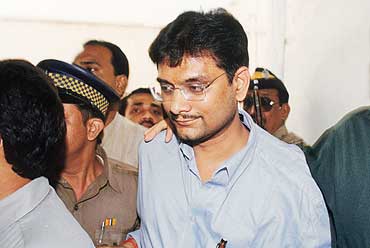 Harshad Mehta and Ketan Parekh were more than just two Mumbai-based Gujarati stockbrokers who had their gala at the bourses while the regulators sleepwalked. Dissect the facts carefully and you'll discover that the two are co-accused in an alleged plot to defraud a mutual fund in 1992.

On both occasions, their schemes got busted right after the Budget and the skeletons tumbled out of the closets when the scanner fell on two relatively inconspicuous banks—Bank of Karad in '92 and Madhavpura Mercantile Cooperative Bank in 2001.

And now in a bizarre rerun of events, even the postscripts are aping each other. The government has approved a 30-member joint parliamentary committee (jpc) to probe the market irregularities. Nine years ago, Congressman Ram Niwas Mirdha had headed such a "high-powered" panel on the securities scam. This time around, the onus is on the bjp's Prakash Mani Tripathi.