The Nation Will Skewer You Now

As self-righteous misanthropes go, the Times Now chief is in the pantheon 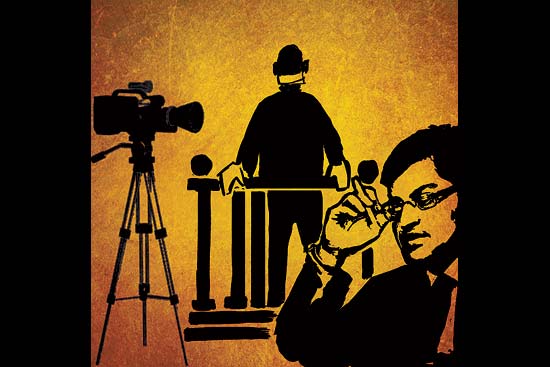 Illustration by Saahil
Shajahan Madampat March 23, 2015 00:00 IST The Nation Will Skewer You Now

An American diplomat-friend wrote to me after reading an article of mine in Gulf News on Arnab Goswami’s Newshour:  “Sounded like you are describing Fox News.” Not entirely sure if I got it, she added: “Fox is not about news, but propaganda.” A rea­der from Dubai quipped on the same day: “I tried to watch it yesterday for the first time, what you rightly describe as nightly tyranny. I was unable to bear the rage for more than 10 minutes.... The nation is in a murderous mood throughout.”

Arnab seems to provoke intense responses of revulsion and dismay among most people. So far, I haven’t come across anyone who has defended his programme. In spite of the near-universal abhorrence of Newshour, its pop­ularity is soaring, or so it appears. Moreover, the prolife­ration of Arnab clones on TV screens across India in reg­io­nal language cha­­nnels has further complicated the enigma of the master of the monologue. What is the magic formula that attracts middle-class India to this obnoxious melodrama? (A Google search for ‘melodrama’ threw up a sentence that per­fectly captures Newshour—“a sensational dramatic piece with exa­ggerated cha­racters and exciting events int­e­n­ded to appeal to the emotions”). More difficult to explain is the pathological masochism that spurs many otherwise int­elligent and self-res­pecting Indians (and some Paki­sta­nis) to subject thems­elves to this public hum­iliation on a regular basis?

At least two components of the magic formula are very much in currency in Indian public life today, defining in many ways the unmaking of pluralist India. First, the appeal of hyper-orgasmic spasms of simulated patriotism coupled with expressions of murderous wrath against real or imagined enemies. This spurious patriotism has, among other things, emboldened Arnab to shamelessly advocate a ban on the documentary India’s Daughter on the one hand and to openly accuse constitutionally elected people’s representatives from Kashmir of sedition on the other, merely bec­ause they argued that people could not be kept illegally in jail for­e­­ver. Both these are biz­arre instances—the editor-in-chief of a media house vehemently cru­­sading for a ban on free speech and for the ind­efinite incarceration of dissenters. He almost seems to suggest that the best way to quell anti-India feelings in Kashmir would be to turn the whole of the Valley into a humongous jail for eternity.

The meticulous cultivation of a larger-than-life and holier-than-thou persona endowed with superhuman qualities is the second component of the magic formula. The modus operandi perfected by the various incarnations of Narcissus varies, ranging from the sophisticated to the crude. Arnab obviously settled for the latter, wearing his omniscie­nce and rectitude on his lips, eyes and fingers, and if that fails to intimidate his hapless guests, he will tell them on their face that they are ignorant, anti-national, or whatever else he dec­rees they are. The next stage is outright gagging, where you will either not speak at all or yell along with the other pan­elists and the anchor. The smarter ones (Alas, they are few!) prefer silence as that will do lots of good for their vocal chords, besides being better understood by the viewers!

In terms of both components of the magic formula, Arnab is in good company. He belongs to an illustrious pantheon of self-righteous and intolerant misanthropes in India and abr­oad, which most certainly includes Bal Thackeray and Narendra Modi. Although a bit late in the day, Arvind Kej­riwal also seems to be fast catching up. When two inc­a­rnations of Narcissus lock horns, we often mistake one for Nemesis, as happened with me in the tiff between Goswami and Kejriwal! The miracle of Arnab is very simple: he successfully created and sustains the chim­era of a TV debate out of a medieval-style kangaroo court. Such makebelieve was possible only because his rise has been coterminous with the decline of the idea of India. As such, the Newsour on Times Now is an ominous sign of the times.

Postscript: I am gripped nowadays by an obsessive fantasy of being invited for a Newshour ‘debate’ and answering to Arnab’s harangues in sign language! That way I’ll at least make sure the deaf will hear me loud and clear.

(The writer is a cultural critic and commentator based in Abu Dhabi.)