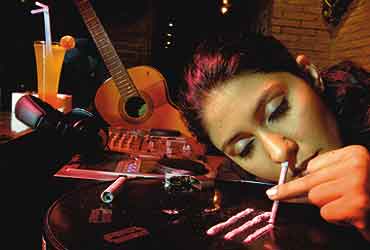 outlookindia.com
-0001-11-30T00:00:00+05:53
Statutory warning: The individuals featured in the story are real. Their names have been changed to protect their identities. Any mention or picture of a bar or nightclub should neither be construed as encouragement of drug use by its management or proof that its patrons use drugs on the premises.

Ratanjit had picked his moment right. The guitarist had just launched into an extended solo, perfect for bringing out the inner teenager in the smart, thirtysomething crowd at the popular Mumbai bar. He could already see two of his colleagues from the bank lurch to their feet, ties askew as they sloppily toasted the band. As he slipped past the women’s toilet he made no eye contact while he palmed a tiny plastic bottle from Shirin. Seconds later, he was chopping up its contents into two powdery lines with his Amex gold card inside the men’s WC.

When Ratanjit emerged five minutes later, the world had changed. The bass was pounding like the heartbeat of some primeval beast. Felt good...mmmm ...sniff!. Those dopes were still sloshing their beer all over their shirt...