An evangelist is Calcutta's mascot, even though more authentic figures abound 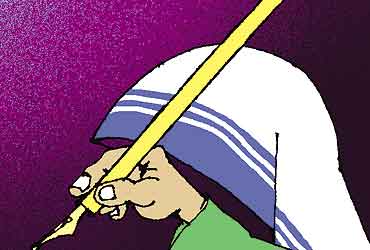 outlookindia.com
-0001-11-30T00:00:00+05:53
Saba Naqvi Bhaumik's 'Saint Teresa' (Outlook, November 3) is lavish in its adulation of Mother Teresa's Missionaries of Charity for 'Indianisation of Christianity'. Not caring much for rationality and its precepts, it eulogises Pope John Paul II's 50th 'miraculous' canonisation ceremony and his concerted effort to repackage Christianity for Asia. All that she says is completely true but not the complete truth. She does not quote the chief pontiff's November 1999 call in New Delhi for the "evangelisation of Asia in the 3rd millennium AD, on the lines of Europe in the 1st and Americas in the 2nd".

Bhaumik's contention that the spread of Christianity in India can't be linked to the British also doesn't hold water. Elizabeth Susan Alexander, in her The Attitude of British Protestant Missionaries Towards Nationalism in India, says: "The evangelical revival of Christianity that swept Britain from the last decades of 18th century changed the situation completely. The Company had to cede...