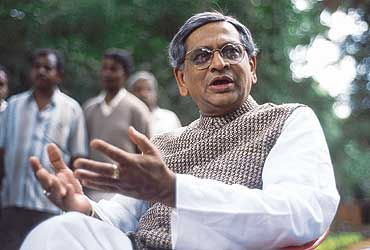 outlookindia.com
-0001-11-30T00:00:00+05:53
The Congress government in Karnataka seems to be going through a midlife crisis. And at the core of it is a most unlikely leader—the suave and tech-savvy chief minister, S.M. Krishna. The euphoria within the Congress about his effective, corruption-free governance is fast evaporating. His public image has taken a beating and political rivals, who till recently had no ammunition, have got him in their crosshairs. Today's Krishna looks a shadow of the politician he was only a few months back.

The CM himself cannot hold back his dejection. His frustration came out at a recent public function where he confessed, "I feel I have come down in public esteem. This is not because of what I did or did not do, but because public perception is dependent on the overall environment." According to a senior cabinet colleague, "The chief minister feels his government has failed to handle the Veerappan issue well. He's a sensitive person. The Nagappa kidnapping, he feels, has blotched his clean record."

Though it was his first confession in public, Krishna has shared his...