The Mob On My Back

Your secrets are public, you're accosted by a host of unsolicited calls, even medical records are open. Is legislation the answer? 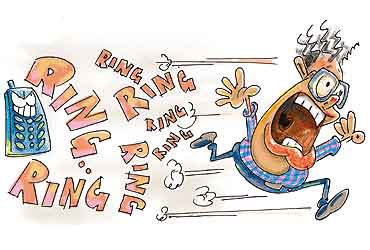 Jaycahndran
Sanghamitra Chakraborty February 21, 2005 00:00 IST The Mob On My Back

outlookindia.com
-0001-11-30T00:00:00+05:53
Harsh Pathak certainly touched a chord with the public this week. The 30-year-old Delhi-based lawyer filed a petition before the Supreme Court, asking it to ban unsolicited telemarketing calls to consumers as they were an "invasion of privacy and violation of the right to live a peaceful life." Harassed 'customers' welcomed it when the court issued notices to the government, cellphone companies and banks. "I responded as a customer totally pushed to the brink," says Pathak.

The notice asks such organisations why the petitioner should not be given relief. It doesn't specify any punitive action. Nor does it imply that there will be an actual ban immediately. It cannot, because India has no law to protect privacy.

But it may make companies more cautious and ensure a degree of self-regulation, which is why Pathak's initiative is seen as a positive beginning. "This may be the first step towards addressing privacy-related issues in India," says D.P.S. Seth, a member of the Telecom Regulatory Authority of India (TRAI).

That's encouraging, because the problem is much...