When the occasion was big, Chandra was bigger. 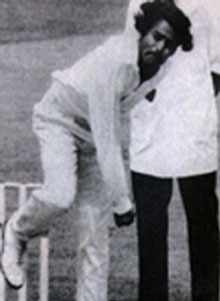 Bhagwat Chandrasekhar was called a legspinner for lack of a word in the dictionary which could describe him. His bowling arm, the right one, had been affected by polio in his childhood, and was so weak that he couldn't even throw with it; but like a wiry mechanical implement out of some sci-fi fantasy, it would gyrate ferociously at the end of a longish run-up, whirling through the air in a dazzling blur, a revolution in more ways than one. Right at the end of the motion, his wrist, as if at the behest of a divine power that wanted to reassert its hold on mere mortals, would release the ball at a stunning speed, for a spinner at least. His googly, and a slithering top spinner, were his main weapons; the leg breaks were occasional.

At The Oval in 1971, he was responsible for India's greatest Test victory till then. Shortly before lunch on the fourth day, England began its second innings, 71 runs ahead. At best, it seemed, India could hope to draw; an honourable series result. Enter Chandra.

The slide began with John...