The Hum Of Holy Breath

From Dharamshala to a Grammy: boy monks take the everyday rhythms of Tibetan monastic life beyond their pine groves 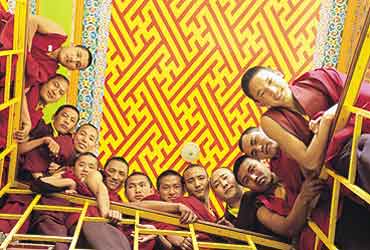 outlookindia.com
-0001-11-30T00:00:00+05:53
Years ago, an ailing monk braved high mountain passes and Chinese border guards to meet other Tibetan exiles in India. He was no ordinary monk fleeing Chinese-occupied Tibet. He carried with him a remarkable freight of Buddhist religious music handed down orally over centuries. His mission—to transfer it to a worthy disciple in India, who'd transmit the pristine art just as his predecessors had.

Today the mystic sonority of those chants has moved beyond the pine-forested environs of Sherab Ling (abode of wisdom) monastery in Himachal Pradesh, where he first unveiled their wonders to his disciple Kalzhang Yeshe.

Sacred Tibetan Chants by the monks of Sherab Ling Monastery has gone on to win one of the international music industry's biggest awards. At the 46th annual music awards in Los Angeles on Sunday, February 8, the monks won a Grammy for best traditional world music album.

This is no throwaway citation. Previous winners for world music are legends in their own right—Pt Ravi Shankar ('01), Brazil's current minister for culture Gilberto Gil ('98),...