Nepal's experiment with anarchy and democracy holds a lesson for India—how autonomised regions of India could evolve. 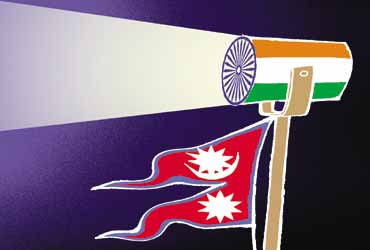 outlookindia.com
-0001-11-30T00:00:00+05:53
The stock of Nepal has never been lower with the Indian public. This is no longer the benign India-locked Hindu kingdom of the hills, but rather a politically unstable, underdeveloped and (to some) even malevolent presence that means India no good.

Much of this image is undeserved, but what Indians think and do have overwhelming impact on Nepal's society and economy. Millions of Nepalis live and work in India, and the number increases by the day. In addition, there are the millions of Nepali-speaking Indian citizens, wrongly assumed to be Nepalis of Nepal, and they too suffer when the perception of Nepal plummets in the Indian mind. This 'downgrading' has been inexorable in the last few years, starting with the Kathmandu-to-Kandahar hijacking drama in 1999 when it was made to look as if the skyjacking was practically a Nepali conspiracy. The 'Hrithik Roshan episode' a year later further battered Nepal's image.

All along, of course, there have been exaggerated reports of Nepal being used by Pakistani intelligence to hit at India's soft underbelly. Kathmandu's...