A passionate guide to wildlife preservation in India, charting its history and historymakers 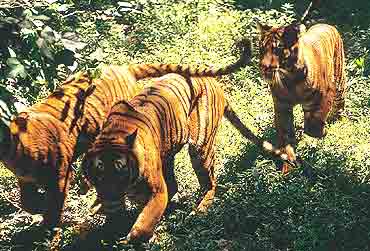 outlookindia.com
-0001-11-30T00:00:00+05:53
At the Zeiss Wildlife Awards in Delhi recently, I had the chance to see the latest film Valmik Thapar has made with the BBC. Called Danger in Tigerland, it’s a stunning tribute to India’s wildlife. Nobody watching the footage of the Ranthambore tigress Macchli battling a would-be mate or suckling her full-grown cubs before she sends them off to fend for themselves could doubt the importance of saving the country’s natural heritage.

Thapar brings the same passion to Battling for Survival, vividly depicting the tragedy of the animal slaughter of the past and the urgent necessity of preserving what remains. His comments, preface and opening chapter link an anthology of what he calls his favourite "bits and pieces" written by the dedicated minority which has struggled to protect India’s wildlife over the last two centuries. Nicknaming them "The Wild Bunch", he has included Jim Corbett, Salim Ali, Billy Arjan Singh and a host of lesser known men and women, many of them members of the Bombay Natural History Society. Sadly, a style which works well in a...